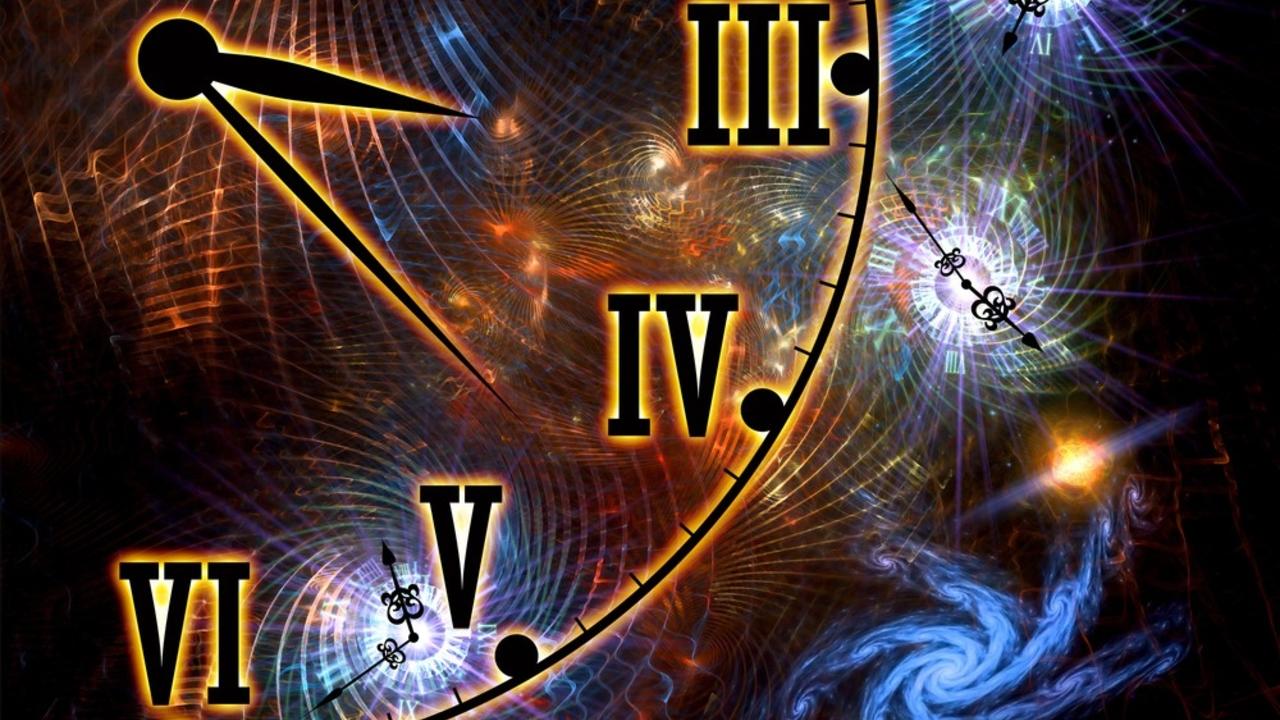 Before moving on to study the physics behind the Principle of Vibration in the next blog, we are going to look at one last subject related to the principles of correspondence and mentalism found in Chapter IV of The Quantum Hermetica; the pentagram. The pentagram is associated with the connection between planes to summon or banish forces and beings. To get into this, we first need to briefly go back over “where” these planes are and how they relate to the physical world.

To recap from an earlier blog, the “where” of these other planes is the collective inner space, the “within” from which the “without” emerges. As we saw before, this can be neatly identified with the synthesis between Hermeticism and physics with the realm outside of spacetime, which is described by the exact same Hilbert space description that our own inner mental states are “coincidentally” explained within quantum cognition. The Quantum Hermetica simply posits that this is more than an improbable coincidence and equates these two, thus describing the entire beyond spacetime realm as having mental properties via quantum cognition. For those readers interested in a recap, the blog going over this can be found here: https://www.spiritsciencecentral.com/blog/the-quantum-hermetica-part-2-the-principle-of-correspondence

But now let’s suppose we wanted to make something manifest from the “spiritual world,” aka the collective inner world, into the physical world. How would we do this? This is an interesting question, as in essence, this is how spacetime already manifests or emerges. A fascinating passage on this exact topic can be found in The Quantum Hermetica, and it arrives at a very surprising yet familiar result1:

“Space-time emerges from quantum probabilities in the wave-function which define locations, which in turn causes space-time geometries to emerge from the underlying non-local reality. Prior to this point, space does not exist. It is only the locations collapsed from the wave-functions that define space. Any student of geometry will immediately recognize that space is defined by points and the connections between them. One-dimensional space will be defined by two points creating a line for example. Likewise, two-dimensional space is defined by drawing a third point and creating a plane, and so on. If we continue up like this, adding a special rule for time asymmetry, we can derive four-dimensional space-time and its contents, from underlying quantum probabilities in a similar fashion. In fact, this is exactly the approach that the quantum gravity theory of Causal Dynamical Triangulations, or CDT, specifies.14 To do this CDT requires five points to triangulate a four-dimensional space-time, much as a triangle is needed to triangulate a two-dimensional plane. The four-dimensional object produced from these triangulations is called a pentatope.

“This is noteworthy as this pentagram is what transfers the information encoded in Hilbert space into our physical space-time. ‘Hilbert space’ and ‘physical space-time’ though are merely the scientific terms used to describe what the Hermeticists refer to as the spiritual and physical planes respectively. In turn, the pentagram is what occultists use to summon energies or entities from the spiritual plane into the physical, mirroring what occurs in the triangulation process of CDT.”

If you are interested, you can read more about this in The Quantum Hermetica Chapter IV, Part F: https://www.amazon.com/dp/B08BF2PNSM.

Anyway, the parallels here are eerie. According to the theory of Causal Dynamical Triangulations, spacetime (and thus all of the mass-energy relations and structures contained in it) emerges from a non-spatial (read non-physical) domain by way of two-dimensional projections of four-dimensional pentatopes (read pentagrams)2,3. However, according to occult practices, forces and entities are caused to manifest in the physical plane (read within spacetime) from the spiritual plane (read Hilbert space behind spacetime with quantum cognitive properties) through the use of pentagrams.

In both cases, it is the exact same thing! Furthermore, the parallels only build on previous parallels describing the spiritual and physical planes in Hermeticism, which in turn also just happen to have a neat match to the physics when they are translated into scientific language. The mechanism here seems to describe something that looks like bona fide magick.

Backing this up, it is interesting to note how occult researcher Dan Winter describes the pentagram as being a two-dimensional projection of a pentatope in the following lecture @4:40-8:00:
https://www.youtube.com/watch?v=uFdjKg6Bi5w

The lecture lacks the context of CDT, which Winter may be unaware of. However, his comments on the pentagram’s orientation corresponding to a pentatope pointing into or out of spacetime are interesting. On top of his comments, it is even more remarkable that two-dimensional pentatope projections are already “accidentally” natural elements in CDT to describe the emergence of something into one plane out of another.

For those interested, the video segment given has another fascinating surprise. Towards the beginning of this segment, Winter describes a precise description of a hyperdimensional object found in the notes of Elizabethan era occultist John Dee. The only problem? The math to understand the significance of what was found in the diary did not exist until several centuries later!


What did John Dee, the court magician of Queen Elizabeth, the first know about hyperdimensional geometry? And if so, how would such a thing even be possible?

Of course, at this point, a seemingly common-sense objection may arise. The pentagrams in CDT are subatomic structures built into spacetime fabric, whereas the pentagrams of occultists are merely quite large chalk scribblings. How could they be related? The Quantum Hermetica addresses this as well in a counterintuitive yet surprisingly simple way4:

“While this comparison is remarkable, the apparent objection will appear that the pentatopes of CDT are Planck-scale quantum objects existing in an objective environment and not the pentagrams drawn by occultists governed by classical physics. And this is quite right; mere chalk drawings existing in an environment are no more special than anything else. Like everything else in such an environment, they are governed by classical laws.

“What is not realized though is that there is no objective environment! The collapse of the wavefunction is relative to perspective, be that perspective a measuring device or a conscious observer. From the observer’s perspective, the environment is in superposition itself and lacks defined reality before it is observed. When an observation is made, what is seen is not the environment itself but rather an image or conscious perception of the domain.

“The chalk in the environment does not have any mystical properties, because the chalk, like the environment it is in, is not even real. Only the perception of it is real, and the perception does have quantum properties since it is the stream of data rendered from the wave-function, which is to say in Hermetic terms, from the mental or spiritual plane, or in Jungian terms from the collective unconscious. Once an environment, or rather the image of an environment, is collapsed into being then naturally any subsequent states in superposition will be very tiny indeed. The space-time would need to be triangulated from these at a subatomic scale. However, the space-time of the initial collapse of the environment can only be triangulated into being from the perceptions of the observer. While everything one perceives does this, the point of the pentagram is to draw the attention of the mind of the occultist. Now what is the image of the pentagram produced from prior to collapse? It is the wave-function in Hilbert space of course, which as we saw in Chapter III is really the collective inner mental plane. This collective inner plane is where the energies and entities are summoned from.”

From the observer’s subjective reference frame, the spacetime is merely nothing more than the observer’s perceptions and would be quite macroscopic as well. The world beyond this is not spacetime at all, but merely the spaceless information feeding into the virtual perceptual interface the observer calls “spacetime.” In turn, these perceptions might just be of two-dimensional pentatope projections (pentagrams), producing triangulations within that perceptual field. Problem solved.

Though these direct correspondences are fascinating, the reader should be discouraged from playing with this, a warning also found in TQH. Summoning entities strays into the area of black magic and may be potentially highly dangerous as well. So at the risk of sounding cliché, don’t try this at home.

The dodecahedron was reported by Plato to be the shape of the universe, a concept likely derived from Pythagorean mystery schools influenced by Hermetics, which coincidentally parallels a modern discovery by French and American cosmologists that the universe may be shaped like a hyperdodecahedron. Where could Plato have possibly gotten this idea from?

Lastly, there is an interesting tie-in with a somewhat separate topic which ties into the Greek importation of Hermetics into the West by way of such figures as Pythagoras and Plato. According to Plato, the universe is a giant dodecahedron5, which is, of course, a Platonic solid composed of twelve pentagons. Well apparently, in recent years, just such a discovery has been found about our universe, which matches this6,7, seemingly implying that CDT is built into the very structure of the cosmos. The Quantum Hermetica describes this in Chapter VI here8:

“The dodecahedron also just so happens to have arisen in modern cosmology with the discovery that the shape of the universe may be a hyper-dodecahedron. This discovery was made by the French physicist Jean-Pierre Luminet after carefully observing the cosmic microwave background, the radiation left over from the Big Bang.3 These observations showed that the fluctuations in the cosmic microwave background were different than one would expect if the radiation were travelling normally through infinite space. In an infinite space, you would expect to see fluctuations of all sizes. However, Luminet found that this was not the case and that there was a cut-off in wave-length. Furthermore, the structure of these fluctuations was such that it only made sense if the universe were a dodecahedron.4

“It is interesting to note that the dodecahedron is directly associated with a geometry we have looked at before under a different context; the pentagon. In Chapter IV, we saw that the pentagon inscribing a pentagram was directly associated with the fundamental structure of space-time in CDT through the two-dimensional projection of four-dimensional pentatopes. If this is the case, then it may be that the dodecahedral shape of the universe is the byproduct of space-time in the very early universe naturally forming into this shape by being built out of the pentagonal projections of these pentatopes.”

There certainly was no modern cosmology during Plato’s time, so where could he have gotten that from? Also, why does it so neatly mesh with the physics described earlier that seems to match the occult use of the pentagram? The reader is left to ponder these curious clues until next week’s blog on the Principle of Vibration.