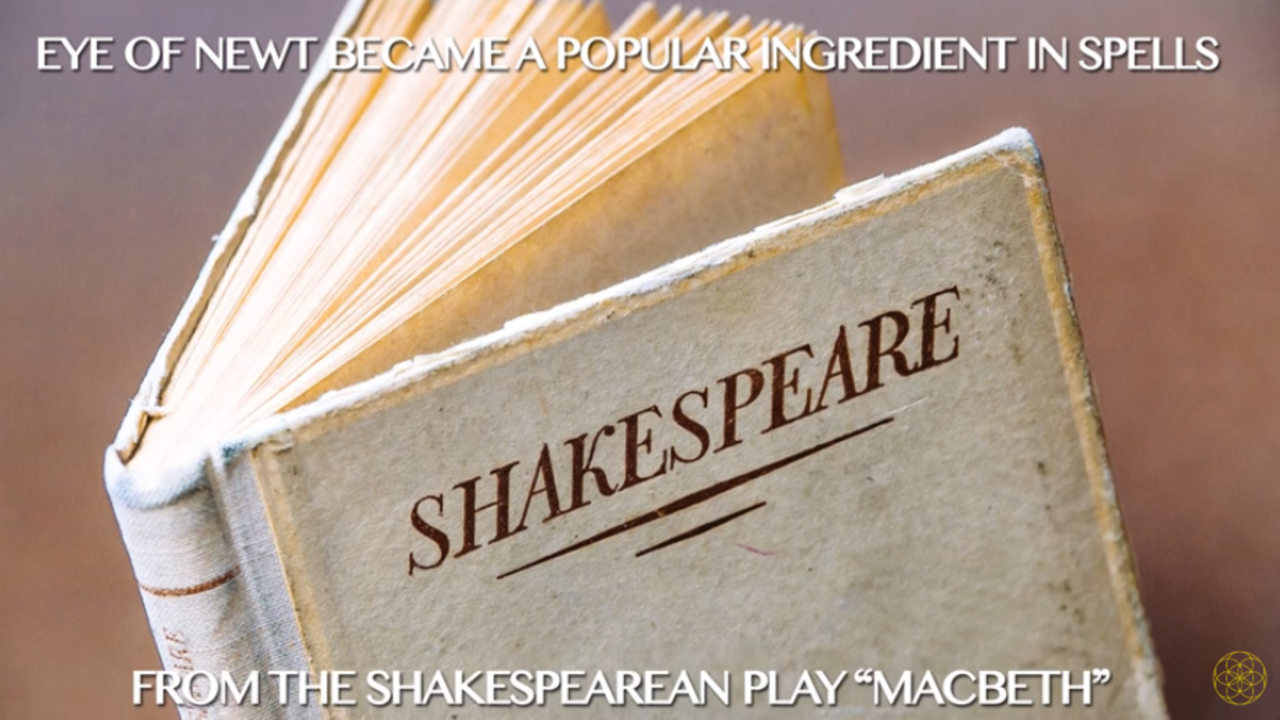 Eye of Newt became a popular ingredient in witches' spells from the Shakespearean play “Macbeth.”

There are only a few different theories on these Shakespearean ingredients. Only a small number of people are convinced it represents a real eye of a salamander or small fish, most people today believe that it is, in fact, an herb. In fact, most of these items in the incantation are herbs.

Most Herbalists believe that Eye of Newt actually refers to a Mustard Seed. This is the most common understanding of Shakespeare’s words. However, there are those who believe it is actually the red berries of the belladonna plant. It is a plant in the same Solanaceae family as tomatoes and has a long history of being both a poisonous narcotic and very useful medication.

“Eye of Newt, Toe of Frog
Wool of bat, and tongue of dog,
Adder’s fork, and blind-worm’s sting,
Lizard’s leg, and owlet’s wing,
For a charm of powerful trouble,
Like a hell-broth boil and bubble.”

And, of course… Their meanings:

Toe of Frog, a Bulbous Buttercup Leaf, Known for its ability to inflame and blister the skin!
The wool of Bat – Holly Leaves – A Medicine known to ease hypertension or high blood pressure. (Note, the berries are poisonous, so be careful!)

Tongue of Dog – Houndstongue – While toxic when dry, the roots were used for treating shortness of breath, and it was said that boiling the leaves and applying the liquid could preserve hair from falling and ease the pain of burned skin.

Adder’s Fork – Adder’s Tongue – This plant has 2 versions, the European and American types. The European version is said to be good for treating eye problems and making ointments for wounds. The leaves of the American plant can be applied to the skin to treat skin ulcers.

Lizard’s leg – Ivy – Not poison Ivy mind you, this plant can be used as a Diuretic, Astringent, Tonic, and gentle stimulant. Also good for Kidney diseases and indigestion.

Owlet’s wing – Owl’s Clover – To be honest with you I couldn’t find any botanical information about this plant, or what it was used for historically. Other clovers, however, are often used as Antispasmodics.

The only one of the group from Shakespeare’s verse that actually related to a real animal was the Blind Worm’s Sting. This referred to the Venom of an Anguis Fragilis Worm.

In the dark ages, “witches” also known as “pagans” and the like would use names like these to scare common-folk so that nobody would really know what they were up to. It was a means of protection to practice Herbology in a time when you were considered evil for doing as such.