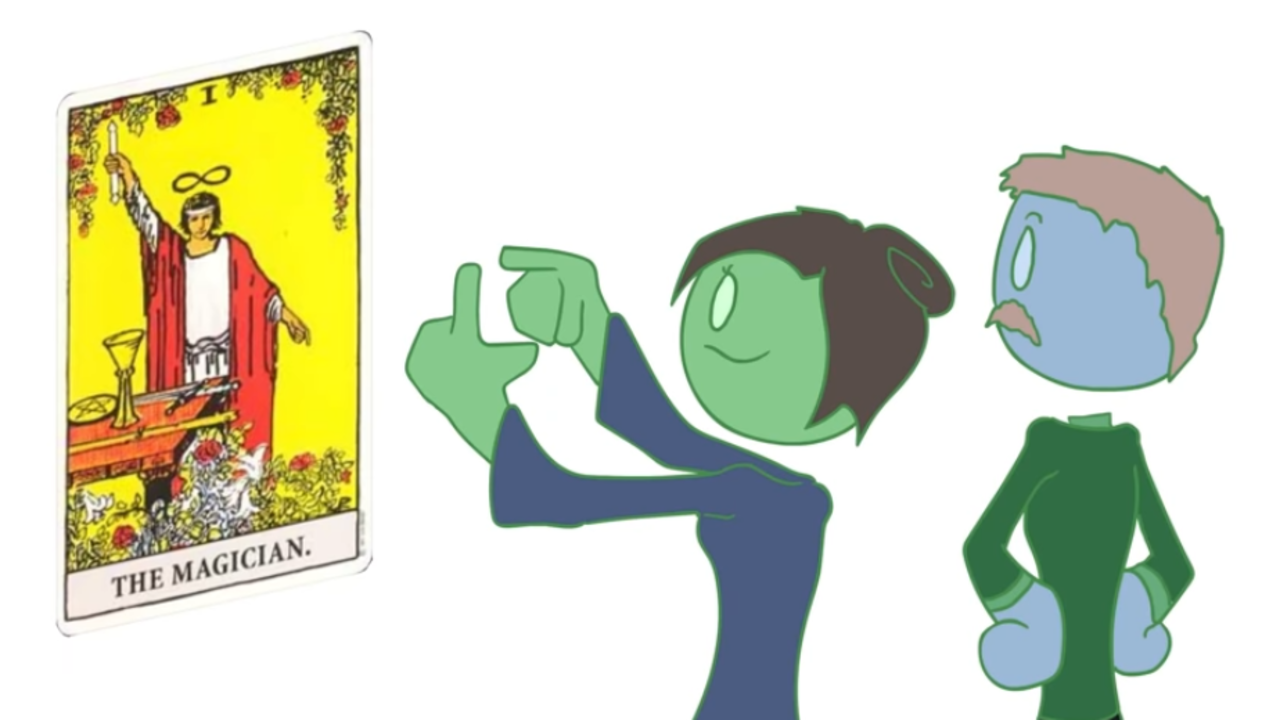 The earliest Italian Tarot cards had unnumbered Major Arcana cards. But as early as 1490, card makers began to place roman numerals on these cards, fixing them to a specific sequence, except for The Child, who remained unnumbered. This practice was carried on by future card makers in France and onward, which brought about the Tarot de Marseilles (Mar-say), setting the standard for hundreds of years to come.

Everything changed when a man named Antoine Court de Gebelin, in 1781, published Le Monde Primitif, in which he hypothesized and linked these popular playing cards to Ancient Egyptian Mythology. The ancient writings attributed to the Egyptian Sage known as Thoth. He also insisted that The Child number Zero, which added a new esoteric dimension to the Tarot as well.

It's the consensus amongst most historians that Antoine Court de Gebelin (jebelin) didn't really have much of solid ground to stand on. Thus most historians believe that the Tarot has no connections beyond its origins in Italy, and that is simply the end of that.

But while most historians believe this to be the complete story of the Tarot, some disagree. According to Tarot historian Tom Tadfor Little, for example, traditional playing cards were first seen in Europe in 1375. Still, they had brought over from the Islamic societies in the middle east, where they had used for centuries before that. Further, it is a well-known fact that the earliest playing cards in history actually appeared in China during the Tang dynasty, and thus may have come about between the 7th and 9th century, though these old Chinese playing cards did not have the suits as we know them. Beyond that; there are many who believe that the spiritual symbolism of the Tarot was hidden in society as a playing card game so that these ideas could exist in the modern world despite the hold that religion had on society, which viewed such subjects as blasphemy.

At any rate, the development of Tarot changed dramatically with the work of Antoine Court de Gebelin, they started being view as more than just a card game - and this was still just the beginning. In the 19th century, a French occultist named Eliphas Levi became the catalyst for bringing even more connections to light, this time between Tarot and the Kabbalah. By his work, the Tarot had now link to the Tree of Life structure, and their cosmic symbolism only continued to grow from there.

By this point, there were enough connections made between Tarot and these ancient philosophies that the cards became incredibly popular amongst more esoteric circles. In 1888, the relationships between Tarot, Astrology, Numerology, Kabbalah, and Hermeticism would realize to an even higher degree by the work of an established esoteric order called The Hermetic Order of the Golden Dawn. This hermetic order was founded by three Freemasons who devoted themselves to drawing the lines between all of the systems above of cosmic interpretation. This was also one of the main establishing points in history for "Hermetic Qabalah," the open interpretation of the traditional Hebrew Kabbalah, which allowed for the free association to other spiritual and ancient traditions such as Hermeticism and the like. By their work, the order of the golden dawn established a new age for modern occultism, and especially the Tarot. This was touched upon in Spirit Science Episode 35 part 3, when we discussed the different branches of Qabalah, and where they all came from.

You see, it was because of the work of this order that the most prominent Tarot decks in history came to light. Most of the authentic tarot decks which are available today based on the two principle decks which emerged from the work of the Golden Dawn. By which are called the Rider-Waite-Smith and Thoth Tarot. Initially, the Rider Waite Smith created out of a union of this new understanding with the older Tarot de Marseilles, and even today it holds the position of one of the highest standards in Tarot. Sixty years later, a Tarot deck created by Aleister Crowley and Lady Frieda Harris would be published, which took the traditional Golden Dawn associations and fused them with Crowley's understanding of the universe and spirituality, bringing Thoth Tarot into being. Today, it is one of the most alchemically infused arcane decks available, and also one of the most detailed in their associations to the list of systems mentioned prior… that said, it was also one of the most controversial tarot decks out there, and supposedly caused quite a bit of drama by its creation in the Tarot community.

Nevertheless, Thoth Tarot opened up a massive door in Tarot, and now ultimately, between Thoth and the Rider Waite Smith, these two decks have influenced the most significant degree of authentic Tarot since then. We can even see this in Patch Tarot as we come around full circle - which designed to reconcile all of the paradoxes that exist between the Rider Waite Smith and Thoth - of which there are quite a few.

In addition to these decks and especially in the last 30 or 40 years or so; thousands of new decks have been produced which explore the symbolism and meaning behind these cards in all manner of ways. Two very significant and other noteworthy decks include the Shadowscape Tarot, which explores the theme of the Rider Waite Smith with outstanding creative art, as well as Osho Zen Tarot, which follows the same theme of Tarot but mirroring the wisdom of Osho so well that each card is a powerful lesson in zen, yet so incredibly simple and clear.

Along with the evolution of Tarot, through the last several hundred years, we also saw the development of Oracle cards, which are generally a set of numbered cards that are labeled with a variety of ideas for personal reflection, such as healing, friendship, love, and so on. Oracle cards do not follow the same pattern of the elements in Tarot and are significantly more straightforward in their makeup, but excellent tools nonetheless.

I want to take a moment to turn to the words of our fellow Tarot historian Tom Tadford Little, who wrote the following.

There is a perception that the study of tarot history is, at best, irrelevant to the use of the cards for divination, and at worst, downright antagonistic toward it. Ever since the fanciful stories of the occult writers, claiming that the cards were invented in ancient Egypt as a coded library of secret magical knowledge, were rejected as historically false, historians have often been regarded as "debunkers", trying to deprive the cards of their esoteric significance and call into question the legitimacy of their magical and religious uses. Indeed, there is some truth in this perception.

We should recognize, however, that tarot cards have persisted as a part of our culture for nearly six centuries. Anything that survives that long will evolve and change, and so will attitudes toward it. The fact that game-playing was an earlier use for the cards than fortune-telling does not make it a better method, it just makes it first use. From our present vantage point, we can recognize that the tarot cards are a cultural artifact of great versatility. It is capable of engaging our interest in many different ways, according to the context in which we encounter them. The nature of the times in which we live and our individual preferences. The history of the Tarot is only part of its identity.

But doesn't that make the early history of the cards irrelevant? To some extent, it certainly does. No knowledge of tarot history is required to read the cards effectively, mainly if one uses a modern deck designed primarily for divination. However, I believe that one's relationship with the cards, just like one's relationship with another person, is made richer by an appreciation of where they came from. If we lack confidence in the relationship, we may not want to hear the facts, for fear that they will disappoint us or shatter a cherished illusion. But, conversely, learning the facts and incorporating them into our understanding of the cards is an activity that strengthens the relationship and makes it more resilient and durable.

Tom has a lot of fantastic information on his site, The Hermitage, which is no longer available on its own but can be viewed through the way back machine, and we'll share some links in the author's comments on this video.

As we bring this episode to a close, we find that the real power in the Tarot is the ability for the intricate symbolism to provide an experience of self-reflection. The cards represent archetypes, ideas that tell meaningful stories, whether in their natural sequence or in the chain that you draw when you use them. By interpreting these stories and relating them within us, we may come to learn more about ourselves and grow as individuals as a result.

Thank you so much for watching, and next time we'll jump into the first of the Arcanum, and interpret the first story of the Tarot.